Difference between revisions of "Using Git"

Git was created by Linus Torvald to manage the Linux Kernel code after BitKeeper withdrew permission for the kernel developers to use their proprietary system free of charge.

Linus specifically designed git to not be like CVS (which he hated from his time at Transmeta), to support a distributed workflow, provide very strong safeguards against accidental or malicious corruption, and to have very high performance. There later features have resulted in it becoming very popular in the open source world.

Further general information can be found on the git wikipedia page.

NOTE: The commands in this section should be done before doing any commits. If the --global option is used they only need to be done once, otherwise they need to be done for each repository initialized or cloned.

If you don't want to set this globally, then you can omit the --global setting to save it in the current Git repository:

If you don't do this, then Git will commit information using whatever user name information is available on the system you are on --which may or may not be correct.

These effects are very noticeable when one looks at the logs for Git (e.g., git log) and incorrect settings can make it difficult to know who committed changes and/or for others to give you proper credit. Another reason to do is that it is very hard (if not impossible) to change logged Git information later.

If you like colour-coded output, tell Git to use such when possible by running:

NOTE: You must use quotes around the editor command if it contains spaces.

If output is too big to fit on one screen, git will use (if such is installed) a pager program such as "more" or "less". The default is "less" but sometimes one might want to use another program, or, one might want to specify options to the page program. For example, to have git run less with its -r option, run:

The following diagram from our youtube talk depicts the basic git workflow and associated commands. 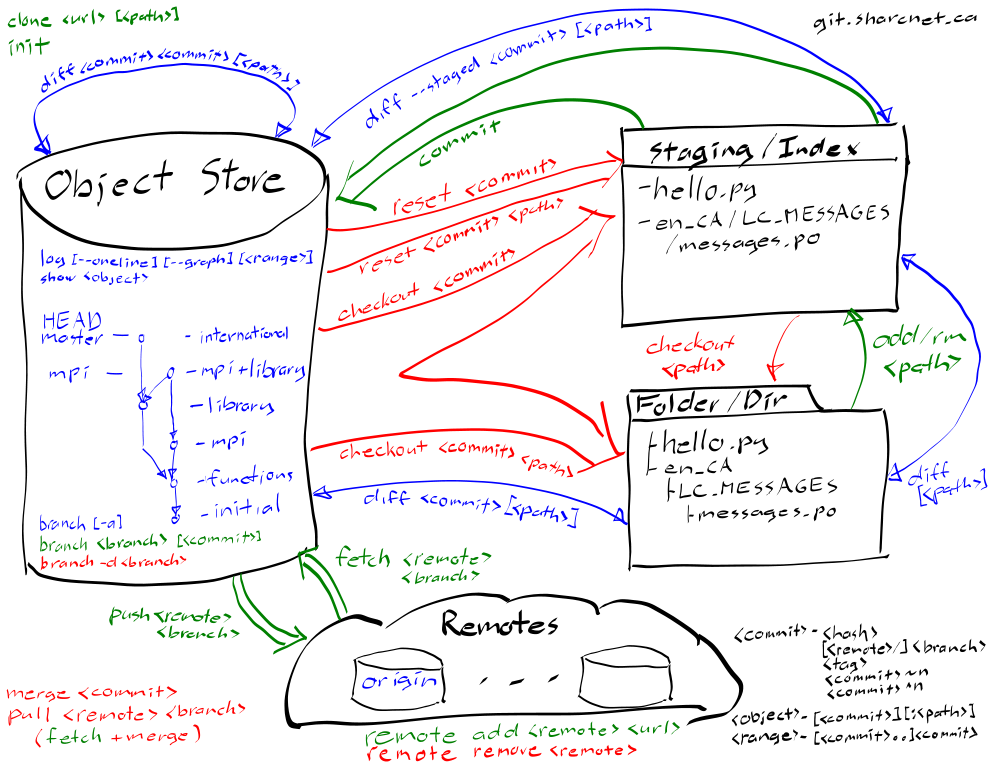 As seen in the diagram, there a four main components when working with git.

Although not strictly required, it can be useful to understand the structure of the object store. The object store is just a collection of objects, that is, chunks of data, identified by part of their SHA1 hashes. The types of objects are

Working locally with git consists of repetitively working with the files in the working tree, adding them to the index at some point, and then committing the index to the active branch at some further point. Possibly it is easiest to think of the index as the staging area. Changes/updates are accumulated in it (git add <filename>) until some reasonable state of development is reached, and then they are committed to the current development branch (git commit).

At any point in time, it is possible to fork off an new branch (git branch <commit> to create it or git checkout -b <commit> to create it and switch to it) or switch to an entirely different development branch (git checkout <commit>), the later of which will update the index and the working tree appropriately. Much of the power of git comes from being able to simultaneously work with several different active lines of development at once.

Detailed information about all the changes made is available via the logs (git log <commit>).

Git is different than revision control software such as SVN in that it does not revolve around a central server. Each git repository is entirely self contained and technically equivalent to all other git repositories. Distributed work relies on a sharing model of swapping changes (commits) back and forth.

While this can be done entirely by email (git format-patch <revision range> to export and git am <message> to import), this is usually only the case for people submitting patches to large open source projects. In a fully trusted situation, it is usually easier to directly import (git fetch <remote> or git pull <remote> to fetch and merge) and exported (git push <remote>) changes to other repositories.

Although all git repositories are technically equal, it is common for one to be chosen as a stable reference repository, with developers choosing to only export complete and tested changes to it from their personal repositories.

To create a new git project, simply do

The --shared option can also be specified to setup repository for sharing with other SHARCNET users. See further down for more details.

For summary information about what has changed (that is differences that exist between the current branch, the index, and the working tree), run

The history of changes can be viewed by

First add the changes to the index via

The commit the changes by running

Files can be deleted and moved by git rm and git mv.

To make a personal copy of an existing repository do

This adds a default remote origin for pulling future changes from. The last two commands set the system up so git push origin will default to sending any changes made to the local master branch to the remote master branch.

Adding remotes to an existing project

Remotes can be added to an existing repository by running

Assuming the default refspec has been setup, commits can be sent to the remote by running

Similarly, commits can be brought down from the remote by running

All of these commands use refsepcs, which correspond to directories under .git, to specify the movement between local and remote branches. At some point, it is recommend to read the information about this in the git-push, git-fetch, or git-pull man pages in order to understanding the + option and fast forwarding.

All users with a common sponsor belong to the same sponsor group. This gives them read only access to each others directories by default, which makes it possible to for each of them to pull changes from the others. For example,

will add other user's git repo as a remote repository to the local one and fetch it. For access off of SHARCNET's clusters, just make the remote a ssh directory

where user is your SHARCNET username and cluster is any of the SHARCNET clusters.

in some master dir under their home directory (so it is backed up), where the --bare option just specified that a working tree is not required. An existing repository can then be pushed into it via

Sponsor group equivalent access can also be given to other specific groups and/or users by using FACLs.

The above does not grant full permissions. Because specified user and group permissions are always masked by the mask permissions (what non-facl aware programs call the group permissions), it just means that the named user or group gets up to equivalent access to the sponsored group (i.e., what was specified with --shared=<umask>).

SHARCNET has a local (run on our severs) GitLab webserver available to all our users at https://git.sharcnet.ca. You login using your SHARCNET credentials.

Git comes with extensive documentation. Run git <command> --help or man git-<command>. A simple google search will turn up a wealth of online tutorials in addition to the below reference links.