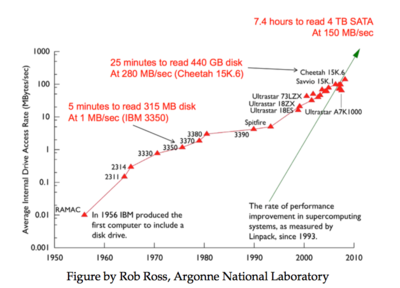 Here is a memory and storage latency. Memory/storage latency refers to delays in transmitting data between the CPU and medium. Most CPUs operate at 1 nano second time scale. As shown the figure, for example, Writing to L2 cache takes about 10 times than CPU operation. As such, accessing to memory has a physical limitation and it also affects the I/O operations. 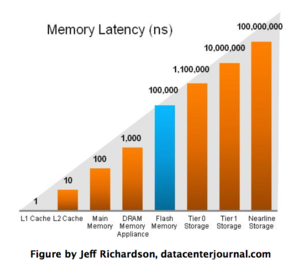 How to calculate I/O speed

Before we proceed more, we better make sure two following performance measurements. Firstly, there is ‘IOPs’. IOPs means I/O operations per second. The operation includes read/write and so on and IOPs is an inverse of latency (think about period (latency) and frequency(IOPs)). And also there is ‘I/O Bandwidth’. The bandwidth is defined as ‘quantity you read/write’. I believe all of you are quite used to this terminology from Internet connection at your home or office. Anyway, here is an information chart for several I/O devices. As you can see, Top-of-the-line SSDs on a PCI Express can push to unto 1GB IOPs. However, the device is still very expensive so it’s not a right fit for several hundreds terabyte supercomputing systems.

One thing I would like to emphasize is that parallel filesystems are optimized for efficient I/O by multiple users on multiple machines/nodes. So, it does not result in “supercomputing” performance in I/O.

Parallel (distributed) filesystems are optimized for efficient I/O by multiple users on multiple machines/nodes, do not result in “supercomputing” performance

When it comes to organizing parallel I/O, there are several layers of abstraction you should keep in mind. First of all, let’s start from the bottom. There is a I/O hardware which is a physical array or hard-disks attached to the cluster. On top of that, we are running parallel file system.

In SHARCNET, for most of system we are running Lustre which is an open-source filesystem. The purpose of the parallel filesystem is to maintain the logical partitions and provide efficient access to data. Then we have I/O middleware on top of the parallel filesystem. It organizes access from many processes by optimizing two-phase I/O, disk I/O and data flow over the network and also provides data sieving by converting many small non-contiguous I/O requests into fewer/bigger requests. Then there would be a high-end I/O library such as HDF5, NetCDF and so on. What it does is that it maps application abstractions to storage abstractions I/O in terms of the data structures of the code. So, data is stored directly to the disk by calling this library and this library is implemented to work quite efficiently. It is better to use this kind of libraries since SHARCNET supports both of HDF5 and NetCDF. You could also use I/O middleware which is MPI-IO. In today’s talk, I will focus more on MPI-IO which is a part of MPI-2. However, I will also discuss the pros and cons of different approaches. And then, as you may see, there is the application which is mostly your program and your program will decide whether to use high-end I/O library or I/O middleware.

In SHARCNET, we do have a parallel filesystem designed to scale to tens of thousand of computing nodes efficiently. For better performance, files can be striped across multiple drives. It means file does not reside on a single hard drive but multiple drives so that while a hard drive taking reading operation and another drive can send back the data to the program.

In order to avoid that two or more different processes access to a same file, parallel file systems use locks to manage this kind of concurrent file access. What actually happens is that the Files are pieced into ‘lock’ units and scattered across multiple hard drives. Then, Client nodes which is computing node obtain locks on units that they access before I/O occurs